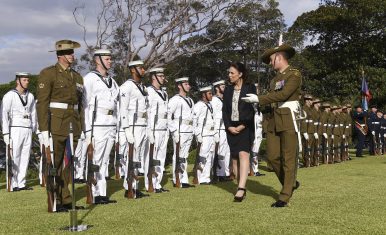 How Will New Zealand Navigate the New Era in Asia?

How will Wellington readjust to shifting geopolitical dynamics in its own backyard?

News out of Beijing late February announced President Xi Jinping could become “president for life,” following the removal of the two-term limit. This news caused shockwaves through the region, including in New Zealand. The need to chart a new direction for NZ’s course in Asia has long been clear. But Xi’s bold bid to solidify power should be seen as confirmation: Wellington can no longer approach foreign policy in Asia according to old patterns.

So what now for NZ in Asia, under the five-month-old government of Prime Minister Jacinda Ardern? A recap of NZ’s history, and the past decade, is essential to identifying possible paths for its future.

A Nation of Firsts

Enjoying this article? Click here to subscribe for full access. Just $5 a month.When Ardern’s Labor Party predecessor Helen Clark stood down as prime minister in 2009, Asia looked reasonably promising for NZ. Newly elected U.S. president Barack Obama knew the Pacific, having grown up in Hawaii and Indonesia, and over time made the U.S. “Pivot to Asia” a cornerstone of his foreign policy.

In China, then-President Hu Jintao did not have the reformist spirit Kiwi’s would wish to see from Beijing; no nation is perfect, but NZ’s human rights laws at home, and its advocacy for them abroad, alongside the democratic process, are enduring traditions. However, Hu was also largely content to focus on China’s economic growth instead of provoking tension around the region and presiding over a huge new wave of restrictions and censorship at home, as Xi has done.

And across the Tasman Sea, Clark had in Australian Prime Minister Kevin Rudd a Mandarin-speaking former diplomat who swept to office in 2007 ready to renew Australia’s engagement with Asia.

The dynamics of 2009 provided familiar certainty for NZ to build and plan its future in Asia.

But by any measure, the past decade has inexorably shattered old certainties in Wellington Xi’s revisionist leadership of China has arisen alongside a big change in Washington’s approach. Current President Donald Trump has often been consistently inconsistent in Asia, variously citing isolationism all the way to military intervention as options to meet U.S. interests.

If Trump and Xi are to lead for the better part of a decade ahead, Wellington will need to change its calculations. So what old certainties need go?

Any assessment of NZ’s future in Asia must necessarily detail the relationship with Australia. By no means have Canberra and Wellington always seen eye to eye, but — similar to the modern relationship of Canada and the United States — even when they’ve disagreed on a specific policy, they’ve usually been agreeable on defining the challenges before them.

But Australia and NZ now face a very different situation from the immediate post-World War II era, when the two nations began a new era far from their closest allies in Europe and North America‚ and with the fear of global communism’s spread in the region binding them together.

While Australia and NZ have enjoyed a close relationship‚ their future will see them increasingly pursue similar, but nonetheless asymmetric aims. Australia’s greatest strategic challenge is balancing the relationship it holds with Washington and Beijing. NZ’s task is finding its place in a region rapidly growing more uncertain‚ and now set to escalate with no prospect of Xi’s rule coming to an end — and potentially bringing the ascension of a new‚ less hawkish Chinese leader.

These differing challenges manifest in distinct priorities for international action. Beyond its focus on the Pacific Islands, Ardern’s government identifies nuclear disarmament and climate change as key areas for international engagement. Australia does not support nuclear disarmament in the same way NZ does, given Canberra’s close ties with Washington. And the Australian government’s action on climate change domestically can only be defined (if favorably categorized) as more modest.

New Zealand’s 2016 Defense White Paper declared “it has no better friend and no closer ally” than Australia. Australia also maintains a feeling of kinship toward NZ‚ but recognizes maintaining the rules-based order in the region will depend on its partnerships with the United States‚ Japan‚ and increasingly, India.

Australia has had the HMAS Sydney sail with the U.S. Seventh Fleet — and while yet to formally participate in Freedom of Navigation exercises with the United States around the disputed territory in the South China Sea isactively considering it. The future will see greater interoperability between U.S., Japanese, and Australian forces. This is underwritten by Australia’s 2016 Defense White Paper, which provides for 195 billion Australian dollars (roughly $150 billion) in defense spending by 2021. This January saw Canberra announce its goal to become a “top 10” exporter of weapons globally.

NZ looks more widely to the United Kingdom and Canada in tandem to the United States, but the realities of geography, and these northern nations’ more limited capacity to project force comparative to the United States means that, the Five Eyes partnership notwithstanding, these ties remain challenged by distance.

And New Zealand has not kept pace in defense investment with its closest partner and ally (Australia’s greater capacity notwithstanding).  Whereas Australia’s 2016 Defense White Paper provided for AU$195 billion in spending by Canberra over the ensuing five years, the 2016 NZ Defense White Paper saw a new defense investment plan worth 20 billion New Zealand dollars (about $15 billion) allocated through 2030.

Beyond this, Wellington’s emphasis on the South Pacific, the Southern Ocean, and Antarctica is also distinct from Australia’s chief focus on the Indo-Pacific.

These differences are not insurmountable, especially among longstanding allies. But it does signal a difficult issue for NZ: how to reconcile its regard of Australia as its closest ally, while seeing a number of key policies and strategic aims out of sync between Canberra and Wellington.

Australia long ago defined and set off on its path, and now NZ must consider a new one.

The Old Is New Again

A contrast with the Cold War era is illustrative of this new dynamic. In decades gone by, NZ pursued a foreign policy focused mostly on geopolitical issues in Europe and the Middle East. In this era, NZ could defy Washington’s wishes‚ see Washington suspend its ANZUS treaty obligations to NZ in return‚ and more or less shrug it off. Today, serious issues exist in NZ’s own region.

A declaration of independence out of Taipei, a North Korean missile over Seoul, a miscalculation and outbreak of hostilities in the South China Sea — any of these could change the shape of the region, and of the world, overnight.

The expectation Xi will remain at the helm in Beijing for many years to come diminishes any chance of a pressure release. With Beijing’s renewed battle for diplomatic influence with Taipei, North Korea’s brinkmanship, Chinese assertiveness in the South China Sea, and even the ongoing tensions in Hong Kong, the potential for tensions to escalate further.

A Foundation for the Future

How Wellington positions itself in Asia will depend as much upon its capacity to avoid present danger as it will on formulating a foreign policy that continues the traditions of its past. These traditions will be tested, but are more important than ever, and must not be abandoned altogether. This dynamic is not exclusive to NZ‚ but its unique history means its future is increasingly complex. A nation with a tradition of pursuing a foreign policy that so often straddled old divides must now face the reality that regional divides are not shrinking‚ but growing. And unlike previous decades in Asia, the consequences of being caught in the middle could be significant.

If Wellington aspires to continue advocating for the traditions it has defended prior‚ it needs to  acknowledge that this era will see these values tested in its own region — and increasingly via opaque means‚ as any future conflict will see trenches and aircraft carriers take a backseat to stealth‚ espionage‚ and cyberwarfare.

It’s here Wellington could find itself increasingly vulnerable‚ especially as it seeks to pursue with Five Eyes a foreign policy that could antagonize rivals, and see Kiwis targeted for reprisal. The risk here grows if NZ’s future is not accompanied by a greater investment in defense, albeit one proportionate to NZ’s size comparative to its ally in Australia and other partners.

A new path needs to be defined by NZ‚ and defined decisively. This course should build on New Zealand’s heritage in foreign policy where possible‚ but recognize that traditions must be cornerstones‚ and not constraints, within this new era in Asia.

New Zealand’s Ardern Tours Polynesia, What About the Politics……