Byzantine monumental Church mosaics are one of the great achievements of medieval art. These are from Monreale in Sicily from the late 12th century.

The medieval art of the Western world covers a vast scope of time and place, over 1000 years of art in Europe, and at times the Middle East and North Africa. It includes major art movements and periods, national and regional art, genres, revivals, the artists crafts, and the artists themselves.

Art historians attempt to classify medieval art into major periods and styles, often with some difficulty. A generally accepted scheme includes the later phases of Early Christian art, Migration Period art, Byzantine art, Insular art, Pre-Romanesque, Romanesque art, and Gothic art, as well as many other periods within these central styles. In addition each region, mostly during the period in the process of becoming nations or cultures, had its own distinct artistic style, such as Anglo-Saxon art or Norse art.

Medieval art was produced in many media, and the works that remain in large numbers include sculpture, illuminated manuscripts, stained glass, metalwork and mosaics, all of which have had a higher survival rate than other media such as fresco wall-paintings, work in precious metals or textiles, including tapestry. Especially in the early part of the period, works in the so-called “minor arts” or decorative arts, such as metalwork, ivory carving, enamel and embroidery using precious metals, were probably more highly valued than paintings or monumental sculpture.[1]

Medieval art in Europe grew out of the artistic heritage of the Roman Empire and the iconographic traditions of the early Christian church. These sources were mixed with the vigorous “barbarian” artistic culture of Northern Europe to produce a remarkable artistic legacy. Indeed, the history of medieval art can be seen as the history of the interplay between the elements of classical, early Christian and “barbarian” art.[2]Apart from the formal aspects of classicism, there was a continuous tradition of realistic depiction of objects that survived in Byzantine art throughout the period, while in the West it appears intermittently, combining and sometimes competing with new expressionist possibilities developed in Western Europe and the Northern legacy of energetic decorative elements. The period ended with the self-perceived Renaissance recovery of the skills and values of classical art, and the artistic legacy of the Middle Ages was then disparaged for some centuries. Since a revival of interest and understanding in the 19th century it has been seen as a period of enormous achievement that underlies the development of later Western art. 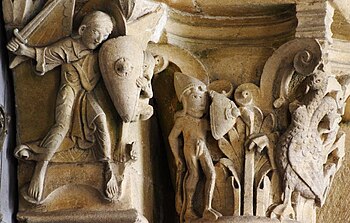 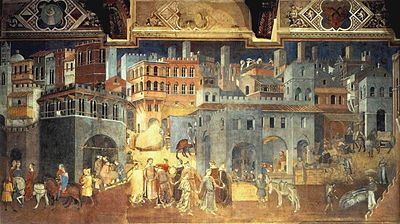 Detail of The Effects of Good Government, a fresco in the City Hall of Siena by Ambrogio Lorenzetti, 1338.

The Middle Ages in Europe saw a decrease in prosperity, stability, and population in the first centuries of the period—to about 800 AD, and then a fairly steady and general increase until the massive setback of the Black Death around 1350, which is estimated to have killed at least a third of the overall population in Europe, with generally higher rates in the south and lower in the north. Many regions did not regain their former population levels until the 17th century. The population of Europe is estimated to have reached a low point of about 18 million in 650, to have doubled around the year 1000, and to have reached over 70 million by 1340, just before the Black Death. In 1450 it was still only 50 million. To these figures, Northern Europe, especially Britain, contributed a lower proportion than today, and Southern Europe, including France, a higher one.[3] The increase in prosperity, for those who survived, was much less affected by the Black Death. Until about the 11th century most of Europe was short of agricultural labour, with large amounts of unused land, and the Medieval Warm Period benefited agriculture until about 1315.[4] 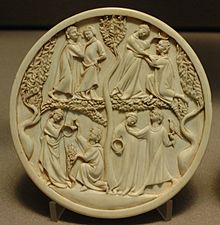 The medieval period eventually saw the falling away of the invasions and incursions from outside the area that characterized the first millennium. The Islamic conquests of the 6th and 7th century suddenly and permanently removed all of North Africa from the Western world, and over the rest of the period Islamic peoples gradually took over the Byzantine Empire, until the end of the Middle Ages when Catholic Europe, having regained the Iberian peninsula in the southwest, was once again under Muslim threat from the southeast.

At the start of the medieval period most significant works of art were very rare and costly objects associated with secular elites, monasteries or major churches and, if religious, largely produced by monks. By the end of the Middle Ages works of considerable artistic interest could be found in small villages and significant numbers of bourgeois homes in towns, and their production was in many places an important local industry, with artists from the clergy now the exception. However the Rule of St Benedict permitted the sale of works of art by monasteries, and it is clear that throughout the period monks might produce art, including secular works, commercially for a lay market, and monasteries would equally hire lay specialists where necessary.[5]

The impression may be left by the surviving works that almost all medieval art was religious. This is far from the case; though the church became very wealthy over the Middle Ages and was prepared at times to spend lavishly on art, there was also much secular art of equivalent quality which has suffered from a far higher rate of wear and tear, loss and destruction. The Middle Ages generally lacked the concept of preserving older works for their artistic merit, as opposed to their association with a saint or founder figure, and the following periods of the Renaissance and Baroque tended to disparage medieval art. Most luxury illuminated manuscripts of the Early Middle Ages had lavish treasure binding book-covers in precious metal, ivory and jewels; the re-bound pages and ivory reliefs for the covers have survived in far greater numbers than complete covers, which have mostly been stripped off for their valuable materials at some point. 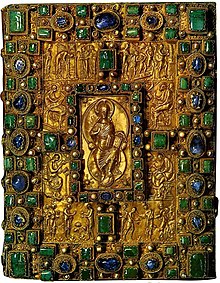 Most churches have been rebuilt, often several times, but medieval palaces and large houses have been lost at a far greater rate, which is also true of their fittings and decoration. In England, churches survive largely intact from every century since the 7th, and in considerable numbers for the later ones—the city of Norwich alone has 40 medieval churches—but of the dozens of royal palaces none survive from earlier than the 11th century, and only a handful of remnants from the rest of the period.[6] The situation is similar in most of Europe, though the 14th century Palais des Papes in Avignon survives largely intact. Many of the longest running scholarly disputes over the date and origin of individual works relate to secular pieces, because they are so much rarer – the Anglo-Saxon Fuller Brooch was refused by the British Museum as an implausible fake, and small free-standing secular bronze sculptures are so rare that the date, origin and even authenticity of both of the two best examples has been argued over for decades.[7]

The use of valuable materials is a constant in medieval art; until the end of the period, far more was typically spent on buying them than on paying the artists, even if these were not monks performing their duties. Gold was used for objects for churches and palaces, personal jewellery and the fittings of clothes, and—fixed to the back of glass tesserae—as a solid background for mosaics, or applied as gold leaf to miniatures in manuscripts and panel paintings. Many objects using precious metals were made in the knowledge that their bullion value might be realized at a future point—only near the end of the period could money be invested other than in real estate, except at great risk or by committing usury. 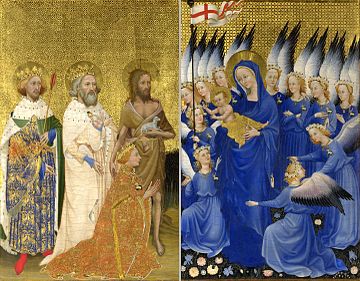 The small private Wilton Diptych for Richard II of England, c. 1400, with stamped gold backgrounds and much ultramarine.

The even more expensive pigment ultramarine, made from ground lapis lazuliobtainable only from Afghanistan, was used lavishly in the Gothic period, more often for the traditional blue outer mantle of the Virgin Mary than for skies. Ivory, often painted, was an important material until the very end of the period, well illustrating the shift in luxury art to secular works; at the beginning of the period most uses were shifting from consular diptychs to religious objects such as book-covers, reliquaries and croziers, but in the Gothic period secular mirror-cases, caskets and decorated combs become common among the well-off. As thin ivory panels carved in relief could rarely be recycled for another work, the number of survivals is relatively high—the same is true of manuscript pages, although these were often re-cycled by scraping, whereupon they become palimpsests.

Even these basic materials were costly: when the Anglo-Saxon Monkwearmouth-Jarrow Abbey planned to create three copies of the bible in 692—of which one survives as the Codex Amiatinus—the first step necessary was to plan to breed the cattle to supply the 1,600 calves to give the skin for the vellum required.[8]

Paper became available in the last centuries of the period, but was also extremely expensive by today’s standards; woodcuts sold to ordinary pilgrims at shrines were often matchbook size or smaller. Modern dendrochronology has revealed that most of the oak for panels used in Early Netherlandish painting of the 15th century was felled in the Vistula basin in Poland, from where it was shipped down the river and across the Baltic and North Seas to Flemishports, before being seasoned for several years.[9]

Art in the Middle Ages is a broad subject and art historians traditionally divide it in several large-scale phases, styles or periods. The period of the Middle Ages neither begins nor ends neatly at any particular date, nor at the same time in all regions, and the same is true for the major phases of art within the period.[10] The major phases are covered in the following sections.

TheLIST: The 10 Female Artists You Need to Know….

European Culture’ Is An Invented Tradition….